Posted on May 11, 2019 | Leave a comment
The Human Geography Research Group at the University of Edinburgh in collaboration with CinemaAttic Productions and Scottish Solidarity with Nicaragua are putting on the following event. 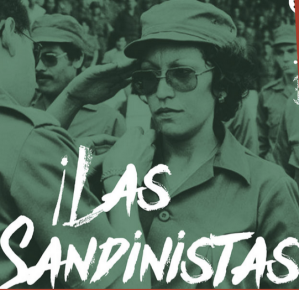 An evening to inform of the situation taking place in Nicaragua as well as celebrate Nicaraguan Culture and Gastronomy. 📣 In this event organised in collaboration with the Human Geography Research Group University of Edinburgh – GeoSciences and Scottish Solidarity with Nicaragua, speakers Julie Cupples, Veronica Campanile and Patrick Welsh will contextualise the crisis happening in NicaraguaThe atrocities by the government of Daniel Ortega against the civilian population are worsening; latest UN figures estimate more than 60000 Nicaraguans have fled just to Costa Rica. Some national Human Rights organisations put the number killed at over 500. 800+ political prisoners that are held in subhuman conditions – subjected to psychological and physical torture including sexual violence. Their liberation is one of the key issues right now.FILM¡Las Sandinistas! – A SXSW-awarded empowering documentary exploring the importance of women’s place in political history, ¡Las Sandinistas! tells the story of the female vanguards of The Sandinista National Liberation Front. These women fought alongside men in the Nicaraguan 1979 revolution but are erased from modern-day Nicaraguan monuments and museums.In this event you will find:★Scottish premiere of award winning documentary LAS SANDINISTAS!★Speakers In Conversation (What is happening in Nicaragua?)★Cancion Protesta (Songs from Latin America)★Food from Nicaragua. Traditional GastronomyLooking back to reach forward. We seek to connect the stories of those women with the current feminist Nicaraguan movement, amplifying the voices of the women that are shaping the change in Nicaragua.
Tickets are available here
https://www.citizenticket.co.uk/event/a-night-for-nicaragua-iexcl-las-sandinistas-mafe-carrero/?fbclid=IwAR3wPizKnTysfGF_UKslwehw3261HcbjVBghBxXjwrQCjMvsqNDMsiIlPms

This entry was posted in Uncategorized. Bookmark the permalink.